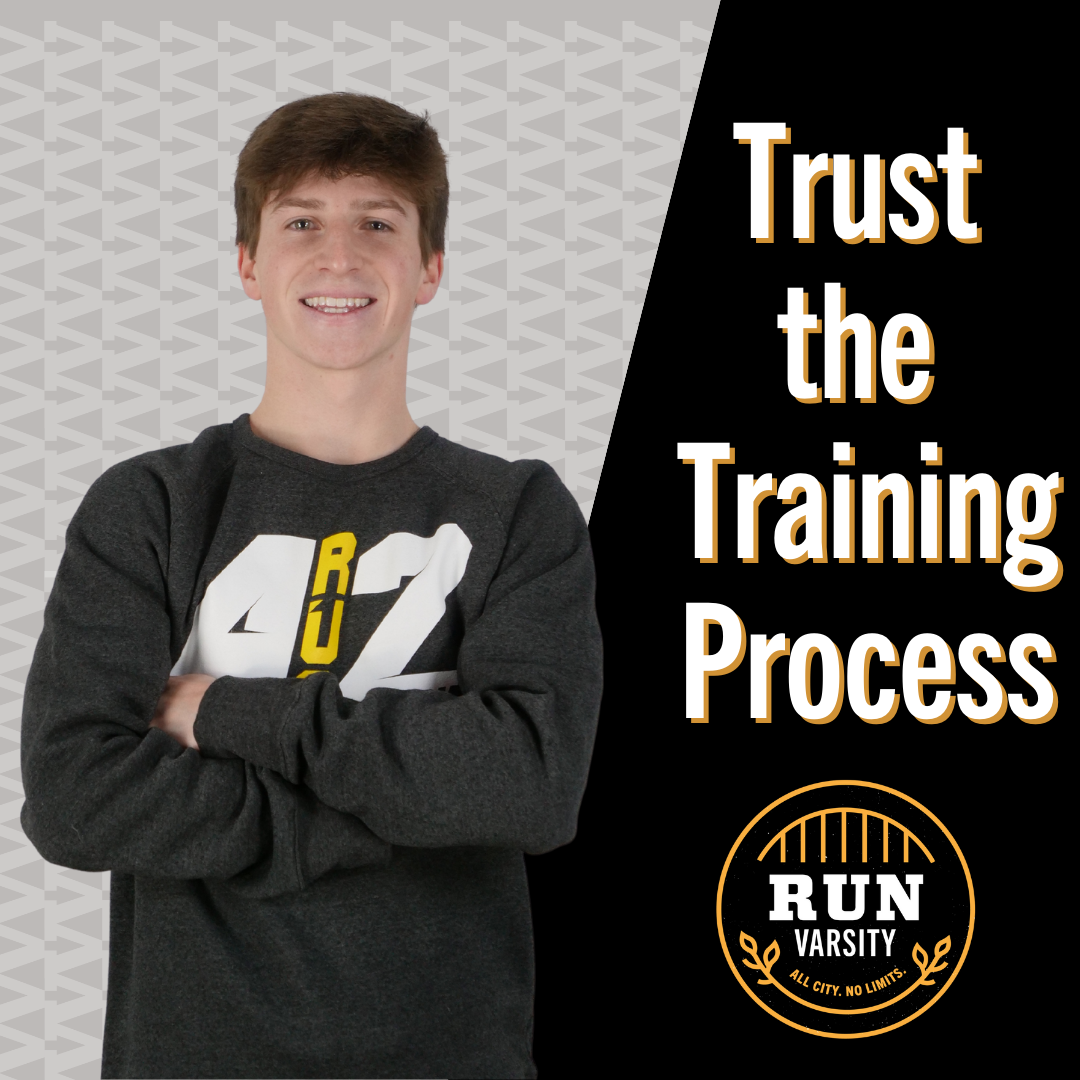 You've probably heard the saying "Trust the Process" before...but what does that really mean? One of our P3R College Athletes, Skyler Vavro, is here to help you understand how to focus on the big picture of training.

Staying consistent in your training is key to reaching your goals and dreams as a runner. When I was in high school, my coach preached to me that staying consistent with my training would help me reach the goals I had always dreamed of achieving. He was right because when I did what I was supposed to be doing, it worked. The worst part of it all was when I wasn’t staying consistent. Blowing up in races is not fun at all. At times it was tough trying to find the motivation every day to get up and do the same thing over and over again. He would often tell me to trust the process, and that everything will work out in the end. Here are some tips and ways that I find myself using to stay consistent with my running.

I wanted to start out by saying that having the right amount of confidence as a runner is crucial to achieving your goals. There is a difference between being confident and being straight-up arrogant. At a competitive level, you must believe that you’re just as good as everyone around you. You have to tell yourself that you belong there and that you’ve worked just as hard, if not harder than everyone on that track. Back when I was just a freshman in high school, I had a teammate that was determined to break 2 minutes in the 800m. He was a senior and it was only his second year running track and field. I looked up to this guy as a huge role model because of his confidence and determination to achieve his goals. He never let anything, or anyone gets in his way. If someone told him that he couldn’t do something, he wouldn’t let it stop him. I once watched him throw out his second-place medal because he just barely missed breaking 2 minutes in the 800m by less than a second. He wasn’t upset with the fact that he got outkicked in the race, he was upset with himself for not achieving what he had planned to do on that certain day. His mindset was that he wasn’t going to accept anything until he achieved this goal. I’m not saying that you should throw away your medal because you didn’t do what you wanted to. I’m saying that you should hold yourself to a higher standard and not settle for being satisfied. My teammate held himself to such a high standard that he believed throwing out his medal would give him the determination to work harder so that he could achieve his goals. I’ve had times in my career where I’ve felt like I’ve had the most confidence in the world. I’ve also had times when my confidence was at an all-time low. Racing without being confident can be frustrating. I found myself dropping out of races at times and not being motivated to get up and run every day. Running with a certain level of confidence can be special once you find it and it’s something that you should cherish if you ever do. It makes you feel like you’re almost unbeatable at times.

I really believe that when you’re racing well and are finding a ton of success it’s because you are really trusting your coaches and you’re finding confidence through them. Having support from your coach and seeing that they believe in your ability as a runner is truly amazing. Establishing good communication with your coach and getting to know them as a person is a good way to start. Understanding that they are a person as well and not just someone who tells you to go run for a certain period of time. I looked up to my high school coach as if he were another father to me. Even now, in my second year running as a collegiate, I am getting to know my coach. Every day, I feel like I’m getting to know him better and really starting to trust him and find my own confidence through him. Your coach isn’t always going to be there to hold your hand every step of the way. Your coach is going to trust that you are doing what you are supposed to. No matter what level you are at, whether you are just entering high school or if you are entering the collegiate level, I recommend getting to know your coaches and having good communication with them.

If you aren’t having fun with running, then you aren’t going to find success in it. I believe that running is truly one of the sports that you have to find enjoyment in to be competing at your best. If you are simply not enjoying it, it can be tough to do well. I know that there have been times when I wasn’t enjoying it and that it almost felt more like a chore than an actual sport that I had grown to love over many years. Learning how to run by myself was a way that really taught me to love and appreciate it. Running by myself gave me a time during the day when I could just go out and think to myself. I would often think about what goals I wanted to achieve and what I had planned to do for the upcoming season. Some days, I wouldn’t even run with a watch or worry about pace. I would just run forever how long I felt like it. I’m not saying that you should do this every day but occasionally, it’s nice not to look at things like pace, distance, and heart rate. I think often, people stress that they have to be at a certain pace or run a certain distance every day to achieve a level of fitness. I think that trying to run the same pace every day just burns you out and makes things less enjoyable. Well for me, at least it does. There are times when you have to take it seriously but there are also times when you should just enjoy it for what it is. You only get to do this for so long so why not enjoy it? I really enjoy easy days with the team. Just getting out there and having good conversations makes the run more enjoyable. So, if the next time you’re running with your team and nobody is saying anything, maybe be the one to spark that conversation.